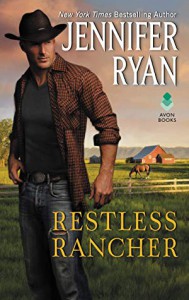 Yes, he’d been humbled, going from living large with money overflowing his bank account to scraping by.

Second in the Wild Rose Ranch series, the troubled Austin is trying to get his life together. I haven't read the first book and I think that really hurt my enjoyment of this. I had no idea who these people were and our heroine, Sonya, with her sisters and family dynamics, seem to be play a big part in the underlining theme and emotion in the series. I think background knowledge on Sonya's family and Austin as a character would have helped my attachment to these characters. This starts with Austin trying to reform his party boy ways because his rich father has cut him off and his girlfriend has dumped him. Austin inherited a ranch from his grandfather but it is dilapidated and needs a lot of money and repair. Sonya comes into the picture because her sister (heroine from book one) is bankrolling Austin's ranch and she is there to manage and run the books for the ranch.

Numbers made sense to her. Everything lined up. People, the things they did, their capacity to hurt others and inflict such cruelties, boggled her mind.

This was a honestly a mess of storylines for me, the beginning focuses for a while on how Austin's grandfather was a hoarder and lingers on the emotional whys of it, Austin's father badly wants the ranch and now his ex-girlfriend is engaged to his father and his father wants the ex to trick Austin into impregnate her, and Austin working on trying to get his act together. Sonya has her own issues with her family, a mother who lived a harsh life, a job that passed her over for promotion, and dealing with her sisters and childhood. There was a scene where Sonya gets angered and in one paragraph spouts a plethora of trigger warning issues that happened to her mother and it felt like heaping awful traumas on a character just for shock or forced emotional value because of the lack of emotional foundation.

She’d stand by whoever she loved. She’d be a true partner. Adversity challenged her, it didn’t back her down.

The romance between the two is fairly instant and not something I completely believed in because of the lack of solid relationship groundwork. They have some good back and forth moments, made better because of the don't back down attitude of Sonya but the constant fluttering between story threads/plots didn't leave enough time for them to develop. The main plot of Austin's dad wanting his ranch so bad could have worked but Austin's forced mishandling of the situation, he didn't seem too curious as to why his dad would want the ranch in the beginning, and him never checking deeds or information about something inherited and carried so much about.

If you read the first, you'd probably enjoy this more then me but I felt disconnected from the characters, there were too many messy storythreads, and the romance moved too quickly without a strong enough foundation. I've other Ryan works before and enjoyed them, I'm going to just count this one as a one-off.