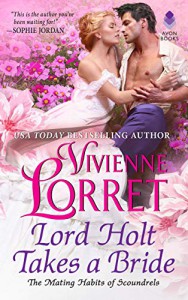 Winn doesn't want to marry the man her father picked out for her, he's callous and in love with his mistress. When her friends come up with a plan for her to become a runaway bride, she at first scoffs but after mistakenly receiving a gift that was supposed to go to his mistress from her husband-to-be on the morning of her wedding, she decides to run.

Asher has always been at the mercy of his gambling father but he finally has a plan to get out from under his schemes, until he runs into some curious debutantes and he ends up kidnapped. Needed money and fast, he devises his own kidnapping plot.

Plans go awry as Winn and Asher traverse the English countryside and they find that maybe love isn't as far or impossible as they thought.

She was the heiress he intended to kidnap.

First in the Mating Habits of Scoundrels series, Lord Holt Takes a Bride, started off as a fun, fluffy road adventure romance. Winn and Asher had a sweet chemistry that brought a much appreciated lightness to these currently heavier real world times. Winn's friends were good secondary characters who got introduced and pleased enough to bring interest to future books in the series but I wish they could have shown up more towards the end as their connection with Winn was missed. Asher came on the page with a lot of intrigue, a treasure map and villainous father, but his connection with his friends was a bit murky and his background with his father ended up feeling more fantastical because of how his father was able to pull off such schemes.

It would be simple . . . As long as he didn’t allow anything else—like an inconvenient, passing attraction—to distract him.

I enjoyed Winn's character but her constant dragging herself down about her looks became tiring and sad. There is a tiny little side story, reconnecting romance between her parents and due to her or what the reader first perceives as her unhappiness, Winn's mother constantly makes little comments that become not so innocuous because of how they bite, about Winn's weight. Throughout the majority of the story Winn thinks about how even though Asher is acting and saying how attractive she is, that he can't possibly truly be thinking this. The continuous reiterating of these thoughts by Winn somewhat dragged down what the lighter fun tone for me.

The Shettlemane title was nothing more than a heap of debt and shame, growing larger by the hour.

Like I said, the first half of this was pretty light and fun but the second half had the road romance adventure feeling a bit dragged out as the story seemed to become a bit lost in its place. One too many misadventures, villains chasing Asher because of his father, and Asher in awe of Winn a lot with her putting herself down, it began to meander and slow. Winn's parents' tense relationship actually started to intrigue me more as emotions were brimming from these two as Asher and Winn's began to stall.

“And you’re the adventure I never expected.”

The ending gave us a reveal and misunderstanding that had Winn immediately thinking the worst of Asher and it had a going through the motions angst ending and extremely serendipitous tie-in for Asher that left me wanting a return to the fun, light, and easy feeling from the beginning. The first half was a fun romp, while the second half lost some of the story's great easiness but if you're looking to disappear into a light road romance this would fit the bill and has some promising heroines for future books in the series.