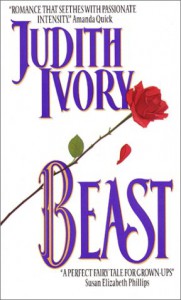 I did a buddy read for this, so for all of my thoughts, comments, and quotes: Beast buddy read

"With him, I became aloud the person I had always been silently inside myself."

This quote right here is what I want to read about and feel when I pick up a romance book.

Beast is obviously a play on the Beauty and the Beast story and while you'll get a true feel for it, the heroine does think the hero is ugly with his scarring for a good while, this almost had more of a Phantom of the Opera vibe.

I'm not sure if it is due to the coincidence of reading about young, spoiled, gorgeous heroines lately but Louise annoyed and lost my interest a fair amount of times. She does show growth towards the end but she got tiring to read about.

The hero was uber vulnerable and this caused him to be prideful and scheming at times. I kind of wanted more of his background instead of the total absorption he had with the heroine. It was hard in the beginning and some middle to feel good about his attraction to the heroine because it was based on her looks, as he didn't know her yet; felt like he wanted her because she was so pretty and prove his looks weren't so bad.

Even with these weaker characters, the story in the hands of this author is worth reading because of beautiful her writing can be. I thought she did a better job in Bliss of showing us the characters' deeper emotions instead of having the characters straight tell us as she did more so here.

Definitely still worth your time but Bliss still holds the crown for me.