The Earl Takes a Fancy by Lorraine Heath 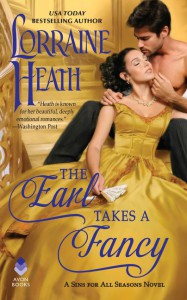 After widowed Matthew's, Earl of Rosemont, wife posthumously has a letter printed in the Times about what a great husband he was, ladies have been clamoring for his attention. He decides to rent rooms in a more middle class area of London to escape for awhile. There he walks into a bookshop and feels his world tilt when he meets the owner.

Fancy Trewlove loves her family but feels pressure to marry an aristocrat because of her mother's dreams for her and all that her brothers and sister have provided her. The more she gets to know Matthew, the more she wants to simply marry for love.

Fancy can't get Mr. Matthew Sommersby out of her mind but Matthew is going to have to see beyond his trust issues.

When she was done, she licked her lips before lifting her gaze back to his, and he couldn’t help but believe he’d never been so enthralled by a person in his entire life, nor would he.

Fifth in the Sins for All Seasons series, The Earl Takes a Fancy stars the youngest Trewlove. If you've been reading the series, you'll know that Fancy is the only biological child of Ettie Trewlove. Ettie took in the other children because of the money aristocrats were willing to pay her to take care of their born on the wrong side of the blanket children. You could feasibly enter the series here as Fancy's siblings pop in and out but no real prior knowledge is needed that isn't provided in her book.

He accepted her as she was. Her past didn’t matter. With him she didn’t have to pretend or put on airs or strive to meet expectations. It was what she’d always wanted, an honesty with a gentleman. And here she had it. As his hands skimmed over her, she thought, yours, yours, yours.

Fancy was a very sweet heroine, borderline angelic. It was nice to read about a character that came from humble beginnings but an extremely loving family and never take for granted or advantage of her siblings largess they found themselves in as adults and shared with her. She was not meek or a pushover, she took a stand against what she thought her mother and family wanted for her in the end, but it was also pretty clear that they just wanted her to be happy. I would have loved more scenes with Fancy and her mother as I thought that relationship could have provided a big chunk of the heart of the story. There were some scenes with her siblings but showcasing them all together or individually more with Fancy could have added extra emotion.

He’d fallen in love with her, damn it. Felled without realizing it. Wanted her as his wife.

Matthew also had his sweet side but I felt like I knew him less. The reader learns that he was trapped into marriage by his former wife and therefore has trust issues and he has a sister that briefly makes appearances but no real friends to help show sides of his personality. I felt like some background and layers were missing from his identity makeup, he still felt pretty static as a character at the end. Matthew shone the most when he was with Fancy and they did spend a good amount of time together, bolstering the romance feel in the story. These two didn't necessarily spark and burn but they did have a gentle quietness loving.

“I love you so much that I can barely remember a time when I didn’t.”

When Fancy enters society, she becomes friends with three woman who are obvious set-ups for a series of their own and I wish they could have spent more time with Fancy to flesh them out more. I also thought the premise of Matthew being able to sneak in and out of Fancy's bookstore without getting caught by Mick a little unbelievable; the way Heath has written Mick it seems like he would have someone watching the bookstore for Fancy's protection. Except for a few secrets to be revealed and an ending distrust issue, this was overall a gentle and low angst read, I can see some readers really appreciating that right now.