The Boyfriend Project by Farrah Rochon 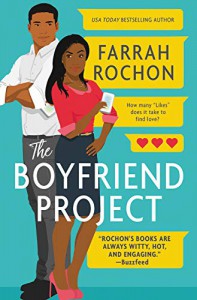 The Boyfriend Project sees three women bond together after they discover they are dating the same man and a video of Samiah goes viral of her confronting him. Professionally, Samiah and London, Taylor is still working her way there, are excelling but feel pressure to have the whole package, a significant other to share their life with. This has lead to them lowering their standards and ending up going viral on YouTube. They decide to make a pact to focus on other aspects of their lives for six months and leave off dating. Samiah has an app that she has wanted to develop and is excited to focus on that. However, a newer hire at her work, Daniel, has her wanting to break some rules.

And even as he told himself they were just two coworkers grabbing a bite to eat, he knew what he wanted it to be.

Daniel, a former Marine, now works for the U.S. Treasury Department's Office of Terrorism and Financial Intelligence. He's undercover at Samiah's work, Trendsetters, because the Office of Terrorism and Financial Intelligence’s Financial Crimes Enforcement Network— FinCEN, detected activity that makes them think that a hotel chain is laundering money with software developed by Trendsetters. In a joint effort with the Department of Homeland Security, Daniel is covertly working to find the employees at Trendsetters responsible for the laundering.

He held the driver’s side door open for her and draped an arm over the top of it. “But I should warn you, I’ve also heard that I tend to grow on people.” He winked. “Be prepared.”

With two people who are mentally and professionally not wanting to get involved romantically, Samiah and Daniel can't deny their potent chemistry. I thought the author did a great job setting these two up and their initial physical attraction that deepened into a friendship and eventual romantic and sexual relationship. Samiah's weakening on her no dating rule didn't quite hit as hard as Daniel's with the seriousness of fraternization while undercover on a job. I did enjoy the fullness of the characters, we don't get a ton of background on Samiah but that worked as her character's issues were more in the present. Samiah's trust issues, because of the two-timing guy that ended up bonding her with London and Taylor and her co-worker Keighleigh who tries to steal credit for Samiah's work (Keighleigh's comeuppance might feel a little therapeutic for a lot), drive Samiah for the slice of life we're reading about. We get a little more on Daniel's background and that worked to give the reader an idea of the kind of man he is, codes he lives his life by and why he wouldn't want to tell Samiah his true purpose at Trendsetters. I also have to say I would read the heck out of Daniel's parents' story as their romance sounds amazing.

A potent, electric charge sizzled in the air between them, a sensation so strong he felt it on his skin.

The beginning of the story, I thought the author worked overtime on minute descriptions that didn't so much enhance the story as slow down the pace with stuff I didn't really care about, for the most part, this disappeared as the story went on. I don't know the Austin area but I think for people who do, they'll enjoy the shoutouts to spots they'll recognize and enjoy that connection. This does have a small twinge of romantic suspense, just think more mental instead of run and gun. I found Daniel's job and the aspects of it fascinating and thought the author described enough for understanding but stopped short of text book. The mystery of Daniel when he first comes on screen, his mental dossier thoughts on co-workers he's never meet before, created an intrigue that sucked me into the story and I loved that.

For the first time in forever, Samiah felt as if she could relax and just …be. There was no pressure, no pretense. She could just exist in this undemanding, enjoyable place they’d discovered with each other.

I did think some of the tension between Samiah and Daniel was more soft than electric, they don't fight too hard to stay out of each other's presence and their relationship reminded me of Grace Burrowe's couples; they fit and click in a way that has them immediately together. Their first sex scene was hot but went a bit too quick for me. Daniel not compromising his job does put Samiah through the ringer but I thought the author did a great job giving Samiah time to process her emotions, leading to a more believable happily ever after.

Maybe it was time she accepted that plans changed. And sometimes they changed for the better.

The importance of women having female friendships was wonderfully put on display here, having shoulders to lean on, understanding and connection to personal struggles and triumphs, someone to push you, and friends to laugh, eat, and drink with. The creation of the HashTagGoals Boyfriend Project also did a good job of setting up future books in the series, I can't wait to read London and Taylor's stories. Most importantly this also showed how while the romance enhanced Samiah's life, it wasn't the be all and end all of it. Samiah and Daniel had a sweet friendship that built to a sexy romance and I had a great time getting to read about it.