A Duke, the Lady, and a Baby by Vanessa Riley 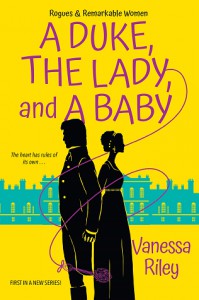 Widowed Patience Jordan is fighting to gain control of her son and home after a nefariously opportunistic Uncle Markham sends her to Bedlam. On a night she is sneaking out of her former home, her late husband's cousin, Busick Strathmore, the Duke of Repington, storms the gates and takes his legal position of being Patience's son's guardian.
Busick is trying to heal and keep his own secrets after being injured at Badajoz and hiring a young beautiful nanny for his new ward doesn't seem like a good idea in a house now full of ex-soldiers. He knows all about Markham and his fiendish ways and is set on finding his cousin's widow.
Patience and Busick will have to learn to trust if they're going to find love again.

It was a universal truth that no matter her background, face, or charms, a widow in possession of a fortune would be targeted for theft.

First in the Rogues and Remarkable Women series, this drops the reader right into Patience's struggles and life. I couldn't help feeling I was missing some introduction novella or prologue. I wish I could have gotten even a few scenes with Patience and her first husband to get a feel for their relationship and the troubles that seemed to plague him. I think this could have filled out the Uncle Markham villain storyline more. We also miss Markham sending Patience to Bedlam, how she became friends with Jemina (a character that is by her side constantly throughout the story), their escape from Bedlam, and how Patience gets saved/involved with the Widow's Grace. Lady Shrewsbury, the leader of the Widow's Grace, could have also been utilized, explained more. All the threads I mentioned seem vastly interesting but the reader comes into the story when all that has passed and I missed out on the depth of experience with Patience for them. Coming into the story when we do, left me at sea for a while but there was still a sense of undertaking that drew me in.

They dragged me, the mistress of Hamlin Hall from this place, from Lionel.

Our heroine Patience is originally from Demerara (modern day Guyana) and was brought to England by marriage. Her late husband, Colin, seems to have struggled with depression, lack of willingness to endure slights given overtly and covertly to Patience due to her mixed heritage, money issues, and a conniving Uncle Markham. They have a son, Lionel, but Colin abandons Patience in the country side. Patience's father left a trust for any offspring she may have and when her son turns a certain age, he will receive four thousand pounds, this money seems to be the catalyst for Markham conspiring against Colin and trying to dispose of Patience.

Our hero Busick is a soldier who fought and was injured in Badajoz, an injury that he tries to hide how badly affected him. He grew up with Markham and is aware of his villainous nature. In a structural choice, not seen often, Patience's pov is first person while Busick's pov is third. They each have their own chapters and until the end at some spots, the pov's are separated by chapter breaks. This helped me greatly in maintaining the flow of the story with the switching povs. I favor third person, so Busick's povs were easier for me to follow but Patience still was the better flushed out character because of more detail and emotion given to her personality and struggles.

These two had some playful moments but overall I felt they were lacking chemistry and some heat. I like open door romances and sexually intimate moments on the page, this had some kissing but would definitely be categorized as very low heat, in regards to intimate scenes on page, this lack could have definitely affected how I felt about this. I also thought Patience not revealing her identity to Busick didn't ring true and was just keep some angst in the story. Patience actually returns to character and deals with this fairly quickly but what came before still felt forced and dragged out. These two had to deal with Markham issues, a possible ghost (seriously, why was this story thread put in there when it amounted to nothing??), and Lionel not liking pap milk and wanting milk (if I never have to read the words “pap milk” again, it will be too soon) for the majority of the story that their developing feelings weren't showcased enough for me.

There was no denying it. He was my beloved, and I was his.

There were some intriguing side characters, Busick's friend Viscount Gantry and his separation from his wife, who is also from Demerara, Patience's friend Jemina and her amnesia, and Lady Shrewsbury the leader of the Widow's Grace that look to have enough story to get books of their own. I missed having been with Patience on some of her past experiences and I would have liked more romance between her and Busick but this did have some venture and mystery that kept me reading.