The Captive by Grace Burrowes 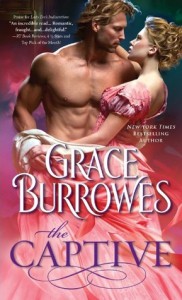 This story is red wine, it's deep, dark, alluring, and multilayered, and will probably not fit the taste palete of the average reader. The Duke of Mercia, Christian, is taken prisoner by the French and systematically tortured over a couple months. Why is an officer and peer of the realm not afforded the usually respect? Well, Christian was captured when he was out of uniform, he was bathing, and this means he is accounted as a spy. Why is a Duke in the cavalry at all? Apparently my friends, even a Duke's life can be described as all that glitters in not gold. When Christian is released, he is severely malnourished and mentally and physically damaged. Why didn't the French just kill him? See, Girard, Christian's main guard/torturer has skillfully and perhaps irrationally kept Christian on the edge of life and death, even when it became apparent that Christian would not reveal any army secrets. When Christian reaches an English camp, his cousin Marcus even has trouble recognizing him and it is his horse, Marcus took care of him, which assures everyone this is indeed his former owner. The devastation is in fact not quite over for Christian however, as he learns that while his daughter is alive, his wife and infant son died while he was in captivity.

Countess, Lady Gilly Greendale, is newly widowed and the cousin to Christian's departed wife, learning of "The Lost Duke" return, pays him a visit at his London townhome to encourage him to return to his county seat and see his daughter posthaste. Gilly is close to Christian's daughter and is concerned that since the girl's mother died she has not spoken a word. Why is Gilly close with Christian's daughter? As with Dukes, Countess's lives can also be filled with less than ideal circumstances. Fresh from being acquitted of her ailing husband's death, she agrees to accompany Christian home to help with the daughter and act as a buffer between the world and Christian.

If all that I have described sounds straightforward, then you haven't been paying attention. This story is not only beautiful words and nuanced characters, it is plot twists, hidden secrets, and raveled human desires. Christian and Gilly are two tortuously beautiful fascinating characters. They blend together so completely that the word chemistry won't seem adequate and you'll simply skip to soulmates. Each has a deep, dark, and complex background that never feels forced or sensationalized. Their thoughts and feelings will provide lines that will artlessly gut you.

This story isn't so much as actions happening but emotions; due to this, the pace is more measured. There were a couple chapters after the middle that sagged because of this, before it picked back up when more action was added. The secondary characters are a large part of the story arc but are interwoven in such a way that Christian and Gilly are always front and center. Devlin St. Just, a friend of Christian provides a muted comic relief while Girard presents the stained side, if he and Christian were to be a two headed coin.

Sip this story slowly and indulge in it, for the characters are cassis and the story is buttery. I will definitely be partaking of the next book in the series as I can't wait to see how the author redeems who she has listed as the hero.